Our ancestors' final years in Germany

Researchers aren’t sure why the Löffler family moved from its longtime homeland of Hohenhaslach about 35 miles northwest to the town of Sinsheim. We aren’t sure exactly what year the move took place, either. It appears to have been in the 1720s, after Hans Leonhard Löffler fathered three sons.

The first reference to Sinsheim is an entry in the book “Burgert’s 18th Century Emigrants from the Northern Kraichgau.” A Sinsheim Lutheran church document dated June 8, 1736 records the marriage of Johann Adam Löffler to Anna Margaretha Trinckel. Johann is listed as an apprentice potter and son of “the late Leonhard Löffler” of Hohenhaslach.

This is the same Johann Adam Löffler born in 1711 in Hohenhaslach. Microfilmed church records in Salt Lake City do not include births from this time period, so we don’t know Johann Adam’s exact birth date. The year was determined from the age he listed on a ship’s passenger list years later. He had a younger brother, Johann Christian, born in 1713. Following the custom of that time and to avoid confusion, we will refer to the brothers by their middle names, Adam and Christian.

The boys’ mother was named Barbara (maiden name unknown). The only evidence we have of this is a 1717 Hohenhaslach church record listing her death at age 31 from tabes (emaciation or starvation). This suggests that the family was living in modest conditions at best, perhaps with little food. We know, however, that somehow the Löfflers carried on. Even though Hans Leonhard Löffler was left a widower with two young sons, we know from ship’s passenger lists and the family history records of many Spoon relatives that he had one more child.

Johannes Löffler (we know of no middle name) was born in 1722. The name of his mother is not known, and we have no record of a second marriage for Hans Leonhard. But the church record listing Barbara Löffler’s death in 1717 justifies the claim made in many Spoon family histories that Johannes was a half brother to Adam and Christian. The identity of Johannes’ mother, as well as the final days of Hans Leonhard in Hohenhaslach, remain a mystery.

At some point before 1736, Adam Löffler relocated to Sinsheim. His brothers either came with him or followed him at some point. Perhaps they left for new beginnings following the death of their father, or maybe they simply sought the opportunities a larger town offered.

Today, Sinsheim is a city of 32,000. It maintains its historic feel with the remains of a castle on the hill and quaint dwellings nestled in a valley bordering Elsenz Creek. At the same time, it is known for its automobile manufacturers and is home to a large auto and technology museum. Its history dates back to the year 770, when it was first named in official documents as “Sunnisheim.” About the year 1000, a group of Benedictine monks established residence on a hill outside the village. The cloister buildings, still standing today, are now used as a youth hostel. Most of the town burned to the ground in 1689, but reconstruction was well underway by the time the Löffler brothers arrived.

Another possible motive for their move to Sinsheim is religious persecution. It is well documented that the fight for religious freedom in parts of Germany was forcing many to flee their homeland during this time period.
The Thirty Years’ War, a series of battles between 1618 and 1648, was the final step in a military attempt to settle the religious division the Reformation had caused. One of the great conflicts of early modern European history, the Thirty Years’ War led to the destruction of many villages and countless deaths. As a result, few church records before 1650 survive to this day.

On one side of the conflict was the House of Austria, which included the Habsburg Holy Roman Emperors Ferdinand II and Ferdinand III, together with Philip IV of Spain. These rulers sought to re-establish the Catholic church throughout Europe. They were opposed by several nations, including Denmark, Holland, France and Sweden, many representing the Calvinist and Lutheran faiths.

Perhaps most of all, however, the conflict became a civil war in Germany, where various principalities took up arms against each other, some for and others against the Habsburgs. It was an ugly period in German history and a costly one for followers of the Lutheran faith. In the years following the end of the war, Lutherans received minimal privileges in practicing their religion. While Catholic and Reformed congregations flourished, Lutherans found few opportunities for organized worship. Under the terms of the Palatine Church Division of 1705 in the Palatinate region of the northern Kraichgau, 5/7 of the parishes became Reformed and 2/7 became Catholic. None were established as Lutheran. In order to preserve the faith, Lutherans were forced to raise funds in other parts of Germany. Their small congregations struggled to survive.

The three sons of Hans Leonhard Löffler were part of this persecuted group of Lutherans. Whether for this reason, for other reasons unknown to us or perhaps for a combination of both, Sinsheim became a favorable option for them. Located in a more populated area, it offered the security of an established Lutheran church, as the 1736 marriage record of Adam Löffler proves. It was also closer to the Rhine River, a means of travel already being used by Germans migrating north to the Netherlands.

In search of a place to practice their religion freely, many had heard of the opportunities available in America. Word of a settlement of German Lutherans in the colony of Pennsylvania was received with enthusiasm. Ships full of German immigrants left the port of Rotterdam (Netherlands) for America on a regular basis.

By the time of Adam’s wedding in 1736, his younger brother Christian had already set out for a new life in a new land.

Following the lead of many Germans fleeing their homeland, Christian set sail on the Rhine River, a scenic trip north and west to Rotterdam. There he boarded the ship Samuel, bound for America. Risking the months-long journey with its virtual guarantee of dangerous storms and exposure to disease, Christian became the first of our ancestors to set foot on American soil. He disembarked from the Samuel at the port of Philadelphia on Aug. 17, 1733. His signature can be found on the passenger list from the journey.

We have no record of any correspondence between Christian and his brothers in Germany, and we don’t know why the three didn’t travel together. Perhaps Adam and Johannes waited for Christian to send word from America before they decided their own fate. At any rate, we know that Adam and his wife Anna Margaretha followed the same route shortly after their marriage, arriving in Philadelphia on the same ship Samuel, captained by one Hugh Percy, on Aug. 30, 1737.

Perhaps it was decided that Johannes was too young to make the journey with either of his brothers. After all, he was only 11 when Christian set sail and 15 when Adam left. Finally, at the age of 25, the youngest of the Löffler brothers made the long journey, sailing out of Rotterdam on the ship Restauration, Captain James Hall in charge. The name Johannes Löffler is one of the first to appear on the passenger list of the Restauration, which arrived in Philadelphia on Aug. 9, 1747 .

This youngest brother, the last of the Löffler immigrants to leave Germany for the promised land, has a special place in the history of the Spoon family. Johannes Löffler represents the next generation in the direct line of ancestors of our Spoon family tree. 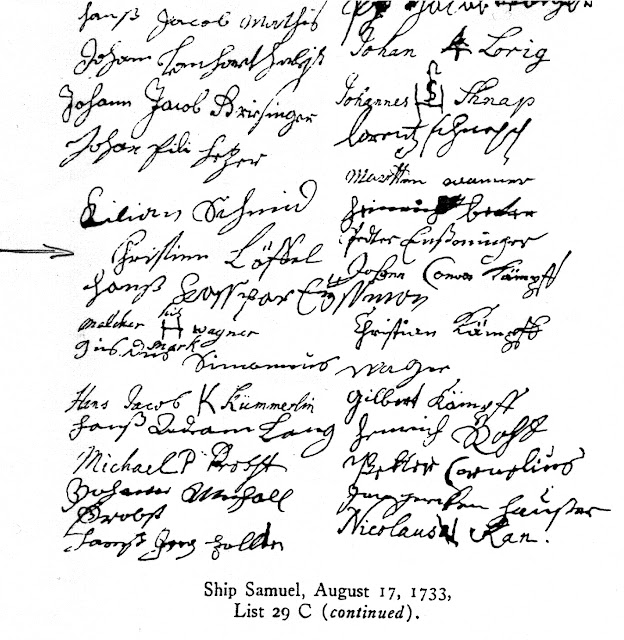