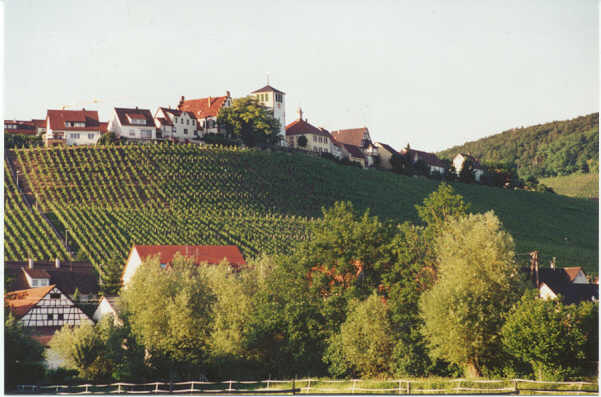 Deep in the heart of southern Germany, nestled in the rolling hills just northeast of the Black Forest in the state of Baden-Württemberg, lies the village of Hohenhaslach.

Today this small town and its neighboring municipality, Saxonia Home, make up a quiet rural community of some 16,000 villagers. It is part of the greater community of Sachsenheim in Ludwigsburg County. Stuttgart is approximately 25 miles to the southeast, with Munich another 225 miles further east. This mountainous region is known as the northern Kraichgau, an area bordered by the Rhine River to the west and the Neckar River to the north.

Home to small businesses, tradition-rich churches and a popular soccer club, Hohenhaslach is perhaps best known in the region for its lush vineyards. For centuries, workers have toiled in its fields to make Hohenhaslach one of the country’s most successful wine producers.

It is also the first known homeland of the family Löffler, which we have come to know in modern times by the surname Spoon.

The German translation of “spoon” is “Löffel,” and genealogists interpret the surname Löffler to mean “spoon maker.” This suggests a possible occupation for our Spoon family ancestors. Further evidence indicates that family members were involved in food preparation of some kind. A 1736 church record from nearby Sinsheim identifies a man since proven to be a Spoon ancestor as Leonhard Löffler, “citizen and baker at Hohenhaslach.”

The man referred to in that church document is listed in Hohenhaslach baptismal records as Hans Leonhard Löffler, born Feb. 17, 1677. Hans, also referred to as Johannes, is the earliest ancestor with a proven direct connection to the Spoon family at this time. Even so, church records in Hohenhaslach indicate that the Löffler family lived in that village at least as far back as the mid-1500s.

As Werner Holzhäuer, a current resident of the town, wrote in correspondence with the author, “An ancient Hohenhaslach family was called Löffler.”

Information about the Löffler family in Hohenhaslach can be found in a microfilm entitled “Evangelische Kirche Hohenhaslach” (Protestant church records of Hohenhaslach) at the Family History Library of the Church of Jesus Christ of Latter-Day Saints in Salt Lake City, Utah. This microfilm of the original German church documents reveals many references to the name Löffler, with naming customs and generation gaps suggesting that we have many ancestors in the area dating back well before Hans Leonhard Löffler.

These records begin in the 1550s, which was probably the time the church in Hohenhaslach was established. Historians note that the Reformation had come to the area around 1555, with shifts in political power establishing most German communities as one of two religious faiths: Roman Catholic or Lutheran.

It is likely that prior to that time, no organized church in the area remained intact long enough to preserve such records. It is also possible that church records were destroyed during the centuries of religious and political upheaval that preceeded the 1500s.
The village of Hohenhaslach dates back to the ninth century, when a land owner named Ruther Lorsch gave property in a region known as Hasalahe to a local monastery. The name Hohenhaslach was first mentioned in historical documents in the year 1283. In 1356, Count Heinrich von Vaihingen bequeathed his entire possession – which included Hohenhaslach and Donkey Castle Mountain, possibly the site of the monastery – to the house of Württemberg. The village had begun to prosper as a quiet community of vineyards by the 16th century.

It is in the first few pages of the records of the Lutheran church in Hohenhaslach that the first entry of the name Löffler is found. On Oct. 13, 1566, a boy named Martin Löffler is listed as the newborn son of Jeronimus Löffler and his wife, the former Anna Berg. It is likely that the dates entered in the church records are those of the actual baptism rather than the birth. Baptisms were performed soon after the birth of a child, however, so for our purposes we will refer to the date listed as the birth date.

There is no further mention of Martin Löffler in the church records of Hohenhaslach. For now, we must assume that either Martin had no children or that he moved away from the area. Since we know that our ancestors were still living in Hohenhaslach more than 100 years later, it seems likely that the Spoon family descended from another member of the Löffler family. Fortunately, the author didn’t have to look far to find one.

Church records list the July 29, 1571 birth of a boy named Jeronimus Löffler. The entry is made under the date Oct. 1, the day of the baptism. Obviously, this is not the same Jeronimus as the one mentioned earlier, but it certainly could be his nephew and a cousin of Martin. The first name of the father in the church document is difficult to read; neither the author nor a translator at the Family History Library in Salt Lake City were able to decipher the handwritten German script. As mysterious as this entry in the church documents is, it very well could be the oldest surviving record of a Spoon ancestor.

One thing is certain – the name of Jeronimus’ mother, Katharina Hauber. The name Hauber, clearly legible on the document, is a famous name in the history of Hohenhaslach. Johann Hauber, a Dr. of Theology, is pictured holding a Bible in the book “Hohenhaslach im Zeitlauf der Geschichte,” a history of the village available at the Family History Library. He is listed as the father of Michael Hauber, a pastor in Hohenhaslach in the 1650s.

Another prominent Hohenhaslach citizen who was certainly a descendant of Katharina is Eberhard David Hauber (1695-1765). After studying at Germany’s Tubigen University, he received the degree of Dr. of Theology in 1727. At the request of King Christian IV of Denmark, Hauber moved to Copenhagen in 1746 to serve as a priest at St. Petri Church. According to a biography of Hauber, “Because of his great knowledge and authorship, he became a member of the Royal Scientists’ Society and was promoted in 1753 as consistorial advisor. His private library contained 16,000 to 17,000 books; he had a famous collection of Bible translations of almost every language on earth.” Hauber is buried in the St. Petri Church graveyard.

Given the religious fervor of her descendants, it is likely that Katharina Hauber and her husband raised young Jeronimus in a loving home with scriptural teachings. Obviously, they attended church in Hohenhaslach. In the records of that church is listed the May 10, 1573 birth of twin sons, Wolfgang and Hans, to the same “Unknown” Löffler and Katharina Hauber.

Assuming that this branch of the Löffler family includes our direct ancestors, we focus on Hans as the next generation in the line that ultimately leads to the Spoons. The recorded births in 1593 and 1595 of Margaretha and Agnes Löffler, respectively, both list a father named Hans (the mother’s name is not listed). Four other children during this time period are listed with a father named Hans; unfortunately, the first names of the last three children in this family, born in 1600, 1607 and 1611, are illegible. The author has determined that one of these children is the father of the next generation in our line of direct ancestors. This is virtually certain, because there are no documents listing any other Löfflers in Hohenhaslach during this time. Until we have confirmation, we will assume for purposes of this study that it is the “Unknown” Löffler born June 6, 1611.

Suggesting that the first name of that child was Hans (or Johannes) would be a good guess. Why? Because the patriarch of the next two generations had that name. Hans Leonhard Loffler, born Feb. 17, 1677, is listed in the Hohenhaslach church records with a father named Johannes. The author could not find a birth record for a Johannes Löffler around 1640-50, the approximate time Hans Leonhard’s father would have been born. But the church record of Hans Leonhard’s birth proves that such a man did exist, and a birth date around 1640 could make this Johannes Löffler the son of the “Unknown” Löffler born in 1611 and the grandson of the Hans Löffler born in 1573.

Granted, this is all supposition until we find more detailed information. This, however, we know for sure: Hans Leonhard Löffler, born in Hohenhaslach in 1677, is confirmed as a Spoon ancestor. The story of his children and their journey to America is well documented. It would be another 100 years before the surname was changed to the Americanized “Spoon,” but as a member of the fifth documented generation of the Löffler family in Hohenhaslach, Hans Leonard already was part of a rich family heritage.