Johannes Löffler must have thought he had sailed right into the land of opportunity when he walked off the ship Restauration that summer day in 1747. America was still nearly 30 years from becoming the United States, but already the colonies offered immigrants the kind of freedom most had scarcely dared to dream about. Pennsylvania, which offered the same type of climate and natural surroundings as their homeland, particularly appealed to German immigrants of that time.

Pennsylvania was granted a charter as a British colony in 1681, but the history of the white man in the region more realistically dates back to 1708. In that year, Conestoga Indians living in the area complained to the Provincial Council in Philadelphia about the conduct of five Europeans who had built a house along the Potomac River. One of the Swiss, a man named Franz Ludwig Michel, explained that he had been sent by his countrymen to search for a suitable tract of land. Despite efforts by the Provincial Council to curtail the construction, the efforts of the Swiss eventually led to the settlement of the area by immigrants from Switzerland, Germany and Holland.

One of the crafts for which the German immigrants were well known was the construction of the Conestoga wagon, a covered wagon named for the Indians native to the area. This drew the attention of Benjamin Franklin, who secured a large number of wagons for use by the colonial forces during the French and Indian War in 1755. This represented a new appreciation of the Germans by Franklin, who just four years earlier had written, “Why should the Palatine boors be suffered to swarm in our settlements and, by herding together, establish their language and manners to the exclusion of ours? Why should Pennsylvania, founded by the English, become a colony of aliens?”

Neither the opposition of native Indians nor the early complaints of colonists like Franklin could stop the settlement of the area by the Germans. The immigrants became known as Pennsylvania Dutch, a term taken from the translation of the word German (Deutsch) and the fact most of these immigrants came to America via Holland. Until recently, many Spoon descendants believed that the family was originally from Holland, knowing only the story of the ship’s arrival from Rotterdam.

It is likely that Johannes Löffler and his brothers first lived in Lancaster County, an area settled by a colony of Swiss Mennonites. Immigrants from the mountains of Switzerland, they settled first in the German Palatinate region before moving on to Holland, England and finally to America. Followers of Menno Simons, they believed in the complete separation of church and state – a belief that caused them tremendous grief in Europe. Beginning in 1710, they began to settle this area of Pennsylvania together with a group of Swiss settlers who were followers of Jacob Ammon – a group today known as Amish. These people, known for their strict domestic discipline and distinctive form of clothing, can still be found in Lancaster County today.

The most detailed evidence of a Löffler brother in Lancaster County involves Adam, who is listed three times in the records of the Lancaster Trinity Lutheran Church, one of the oldest churches in a U.S. inland city. Twice in 1743, Adam donated gifts to the church – a napkin for the baptismal table and pews for the chapel. Adam appears to have been a very active member of the congregation, which is known as a major force in the establishment of the Lutheran faith in this country. Under the direction of Henry Melchoir Muhlenberg, Patriarch of the Lutheran Church in America, and the Rev. John Casper Stoever, members of Trinity Lutheran Church contributed greatly to a population that quickly spread to other parts of colonial America.

Very little is known about Johannes Löffler’s time in Pennsylvania. Most of the information on this subject comes from the research of Michael Boyles, a dentist in Winston-Salem, N.C. Taking information provided by his ancestors and after studying documents in Pennsylvania and North Carolina, Boyles has pieced together a likely scenario regarding Johannes’ early years in this country.

First, Boyles notes that Johannes Löffler was soon known in American documents by the name John Spoon, the English translation of his name. This supports the research of many others who have found evidence that the Löffler brothers first changed their surname to Löffel, then adopted the English meaning by changing the name to Spoon. Since many other John Spoons followed in future generations of the Spoon family tree, Boyles refers to the former Johannes Löffler as “John the Immigrant.”

Boyles acknowledges that it appears John the Immigrant spent the least amount of time of the three brothers in Pennsylvania before moving south. He has, however, uncovered some interesting facts. First, John Spoon married a woman named Sally (maiden name unknown). The couple had a son named Adam. Sources indicate that John the Immigrant also worshipped in a Lutheran church, perhaps the same congregation as Adam, with Henry Melchoir Muhlenburg as his pastor

According to family records and Boyles’ research, John Spoon left Pennsylvania sometime in 1763 to start a new life in North Carolina, a colony where land was readily available and affordable to immigrants. He traveled in a group that included Michael Shoffner, Adam Moser and his nephew Fredrick, and a man named George Fogleman – whose surname would become a significant part of the Spoon family history in the coming years. All appear to have been members of the same Lutheran congregation.

They were lured by yet another promise of a home where they could practice their religion and pursue their lifestyle without fear of persecution. Joining other German Lutheran immigrants who had perhaps grown weary of the crowds pouring into Lancaster County, John Spoon headed for North Carolina and a new chapter in Spoon family history. 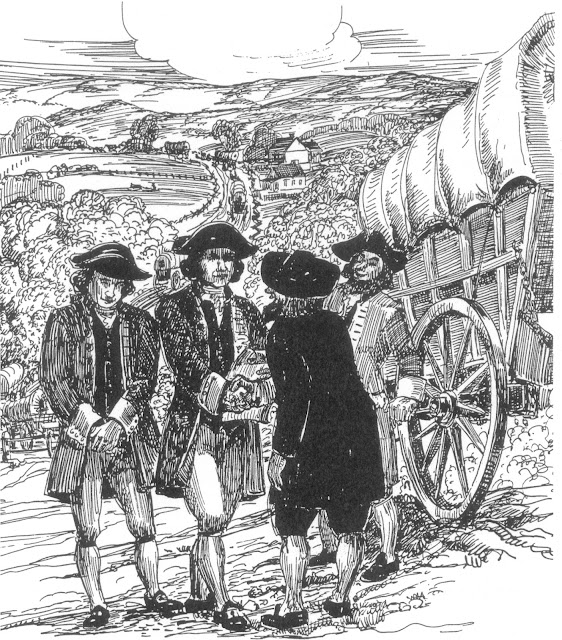